How I built an ultrasonic 3d scanner

Here's how I built the first ultrasonic 3d scanner in the world that works in the air, using off-the-shelf components (< $100). 1

[I was wrong. I got an email from the founder of the research group at 3dsonar.eu and it seems like I'm second :/]

Four years ago, I was 15 and wanted to build an autonomous drone to deliver me Coke cans. For that, I needed an accurate 3D map of the surroundings of my drone to avoid walls and objects in its way. Lidars were too expensive and SLAM2 didn't work well. There were ultrasonic sensors, but they could only give out the distance to the nearest object in a 40° cone, which wasn't enough for me.

But, if humans can locate the exact direction of a sound, why can't an ultrasonic sensor do it too? That would allow me to scan in 3d.

A transmitter emits a wave, which bounces on objects, and two receivers triangulate the echo to put it on a map. 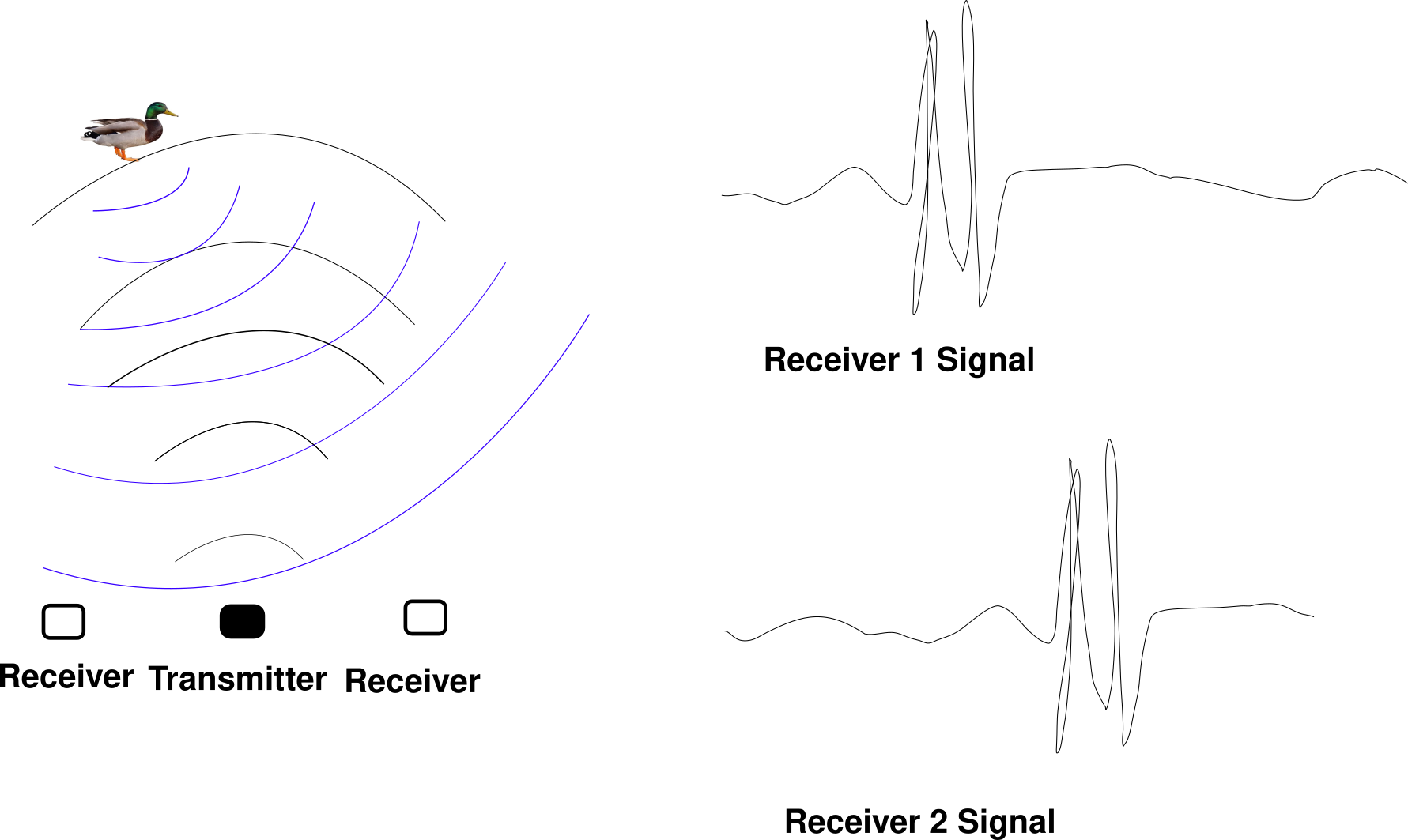 But, this only works well for one object. As soon as there's a second one at the wrong spot, you can't tell apart one's echo from the other's. 3 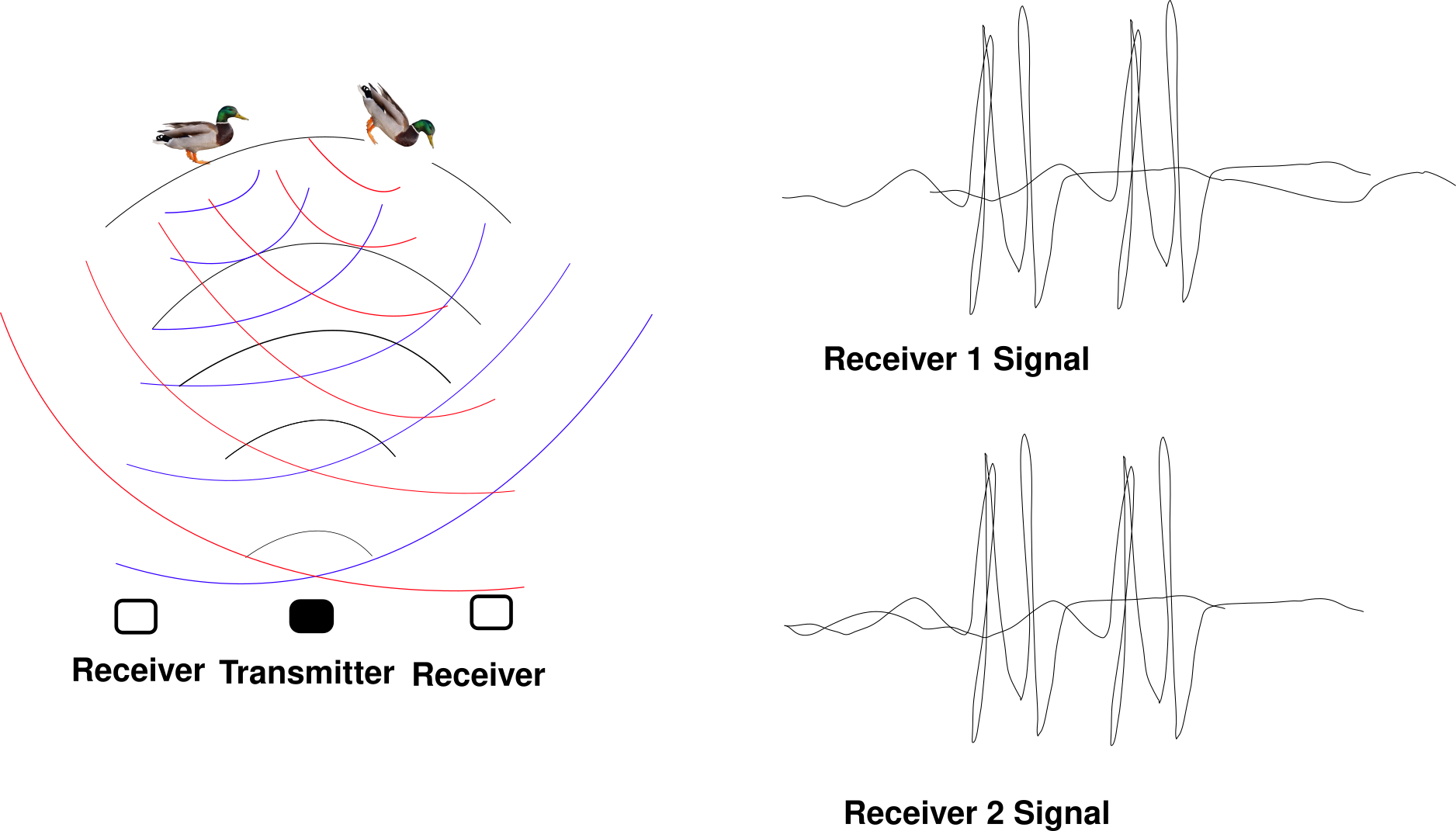 A few guys built scanners based on that. They work well for spotting fingers for a virtual keyboard, but can't handle more than a few objects.

Two years later: back to the drawing board.

What saved me was the principle of interference. Let's say we have two sound waves in space, let's call them F1​(M) and F2​(M), where F1​(M) returns how far the first wave moves the particles at point M.

But what happens in a situation where F1​(M)=−F2​(M)? Well F(M)=0! Particles don't move in M even though there are two non-zero waves there. This phenomenon is called destructive interference. Interferences rule how all wave sources radiate in space. The lightning patterns on the surface of the water, the equations ruling mirrors, lenses and antennas all derive from this superposition principle.

Now it turns out that if you arrange a lot of emitters regularly in a plane, the wave will stay constrained inside of a beam like the one of a lighthouse. The following arrangement of emitters, all in phase: 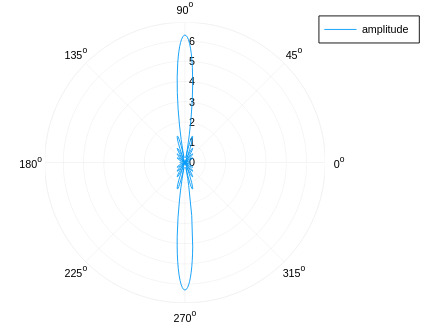 The real miracle is that if you delay each emitter's emission time by a linear amount nϕ, for instance like that:

Then, the angle at which the beam will point will be proportional to ϕ! If we control ϕ, we control where the beam points at!

With that principle, I can build a 3D scanner using the following algorithm:

.. done all over space, the sensor can scan its environment like a lighthouse.

If it's so easy, why hasn't anyone done it before?

The problem is that if the emitters are too far apart, there won't be one but three beams. With three beams, scanning is impossible. The emitters have to be as close as half the wavelength to avoid sending sound to the wrong place.

But, commercial ultrasonic transducers are made larger than a wavelength to "pinch" the radiation pattern. They're mostly used for car parking sensors.

I searched on Aliexpress and Banggood for hours, there was no way to find ultrasonic transducers small enough.

After entire evenings spent trying to understand why two additional beams would appear when the emitters were too far apart, some blinking flash of intuition stroke me.

If I imagine my emitters as plates all touching each other, the wave that they produce can only go in the direction of the beam. There can be no second and third beams on the sides. It's one of these intuitions that are hard to explain.

Until now, my simulation and almost all the ones you can find online assume that the emitters are dots with zero radii. And by simulating these sources not as dots but as "plates" (ie, 10 dots in phase put next to each other), the sonar works!

There's still a second beam that appears at high angles, and the max scanning angle is lower than if my emitters were closer than half a wavelength. But it should be able to work!

I planned to make a 10x10 grid of 10mm transducers. I thought that driving a phased array would be similar to driving an array of LEDs.

I bought hundreds of transducers for $50 on Aliexpress. To me, all I needed was 74HC595 Shift Registers (that's what they use for driving many LEDs) and an NPN transistor to convert the 5V of the shift registers to the 40V of the ultrasonic transducers. Then, I'll solder hundreds of these components on a protoboard. I had already built rocket parachute timers on protoboards. I thought it would be the same 🙄.

After I received my components, I tried to make an ultrasonic transducer work. When D13 is HIGH, current flows in the transistor and opens it to the alimentation next to it. 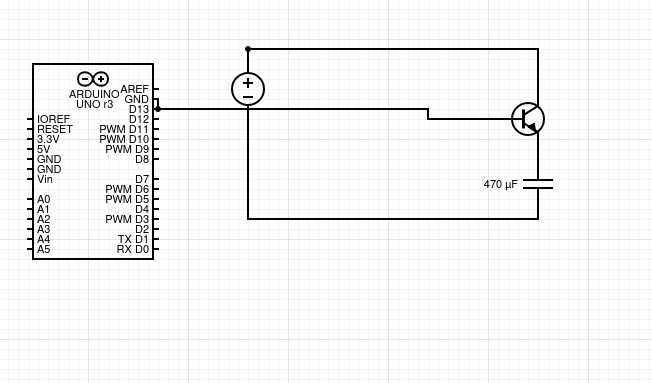 If you've already done electronics before, you've probably laughed out very hard. An ultrasonic transducer is roughly equivalent to a capacitor. A capacitor is like a water reservoir, except for electrons. Therefore, to drive it the circuit needs to empty and to fill that capacitor 40 000 times per second. The NPN capacitor here only cuts out the alimentation of the capacitor, but there's nothing to discharge it.

It took me a few days to understand the issue, I then tried another circuit, the half-bridge:

But, In practice, this circuit only works with supply voltages lower than the voltage of the Arduino signal, 5V in my case. The reason for that (and it took me 5 days to figure it out) is that PNP transistors (the kind of the top transistor) are closed when current flows from the top pin to the left pin, and 5V (my Arduino's voltage) isn't enough to stop a voltage from a 40V source to induce a current. I needed to drive it with a 40V signal, which meant ANOTHER transistor! 5

Here, the leftmost NPN transistor drives the PNP. The consequence of that is that I need three transistors, three resistors and two Arduino pins for each transducer. That's 300 transistors and 200 Arduino pins ie 200/8 = 25 shift register pins. That's too much to fit close to the transducers.

But at least, this circuit works. It just needs a bit of miniaturization.

Though, with a functional transmitter, I could get my first beam. I connected 8 emitters in parallel to a half-bridge and got a beam! 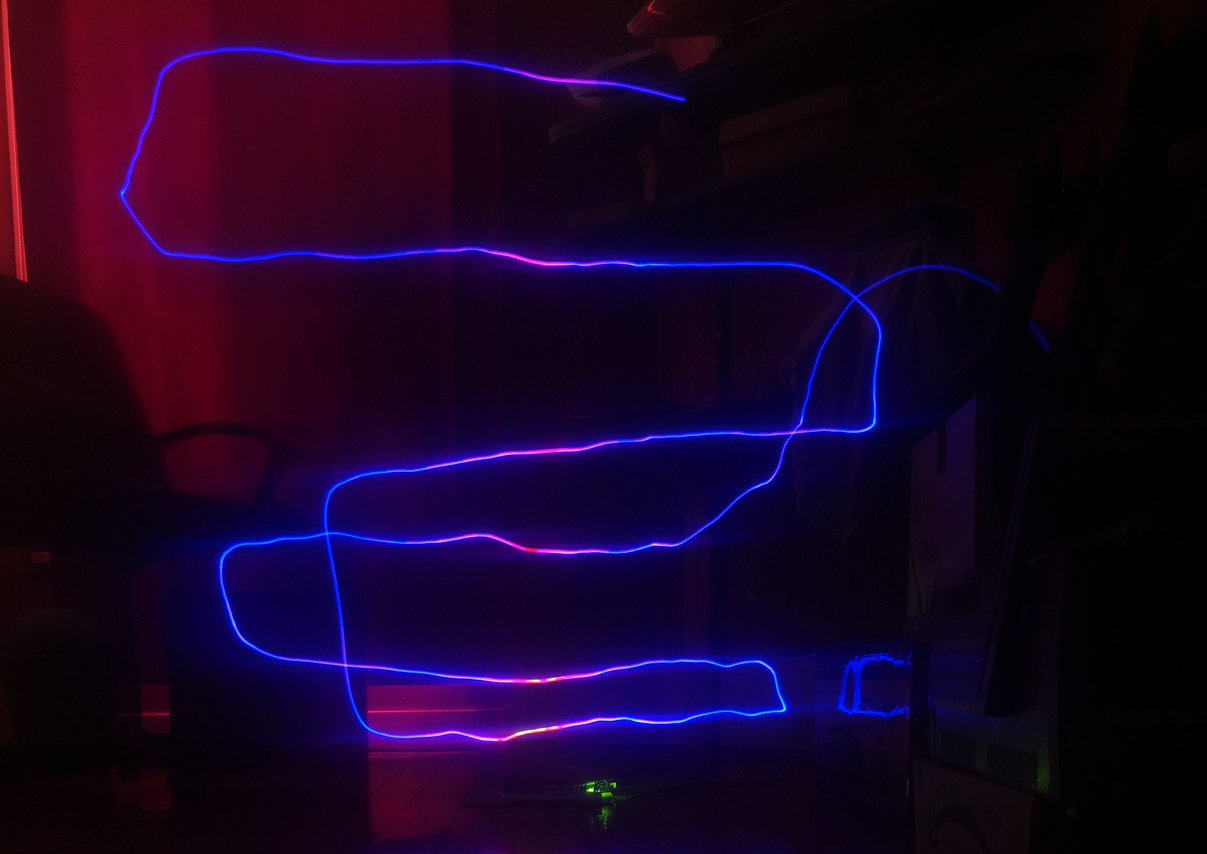 The emitter is the green light on the bottom. Blue is low signal, white/red/purple is high signal. I used a Teensy 3.2 which shows the signal intensity as a color on a LED. Then, I took a long-exposure photo while making the teensy travel in the beam. 6 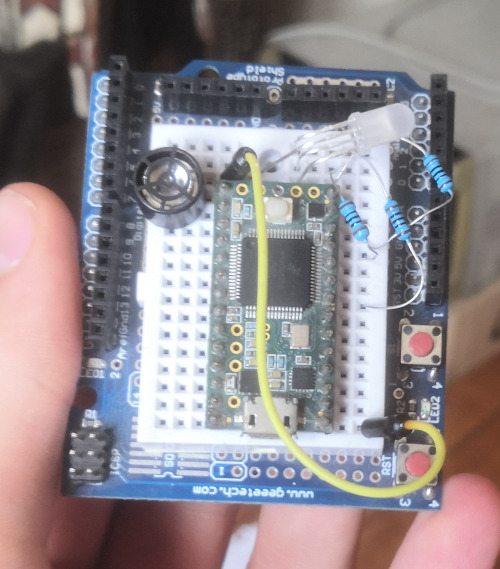 My emitter was working correctly, the beam size matched the simulations.

It sort of worked, but the timings were different between both shift registers. Because of that, there would be times were both shift registers would be allowing current to pass, which resulted in a short circuit. The MIC5891s had bad timings at high frequencies, so I got back to the drawing board. 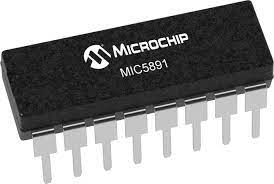 Finally, I realized that both NPNs (the one driving the top PNP and the one putting the capacitor to the ground to empty it) could be replaced by an open-drain shift register (which worked well in my latest experiment). So I finally settled on that. I would only need two shift register pins, a transistor and a resistor for each transducer. That amounts to 25 shift registers, 100 transistors and 100 resistors to solder.

I quickly realized that there would be way too many components to manually solder. I had to design a PCB.

I had never done any EDA before, so I started to learn and use KiCad. Two days later, I had my PCB ready to be manufactured!

With jlcpcb.com I had my 10 PCBs a week later for $20, including $18 for the fast shipping. I hated using a Chinese company for a job that could be done in France, but no local companies were offering the same service. 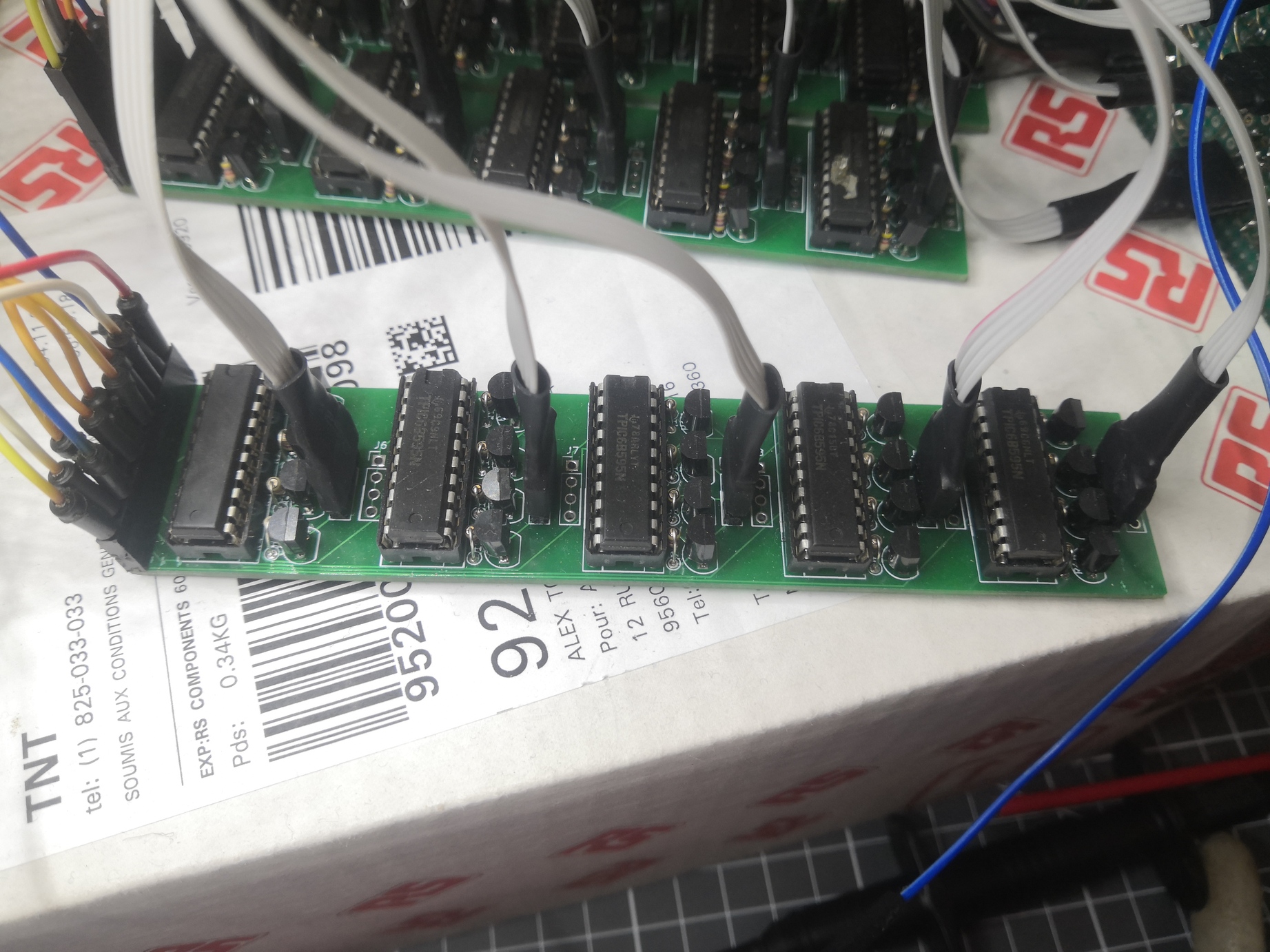 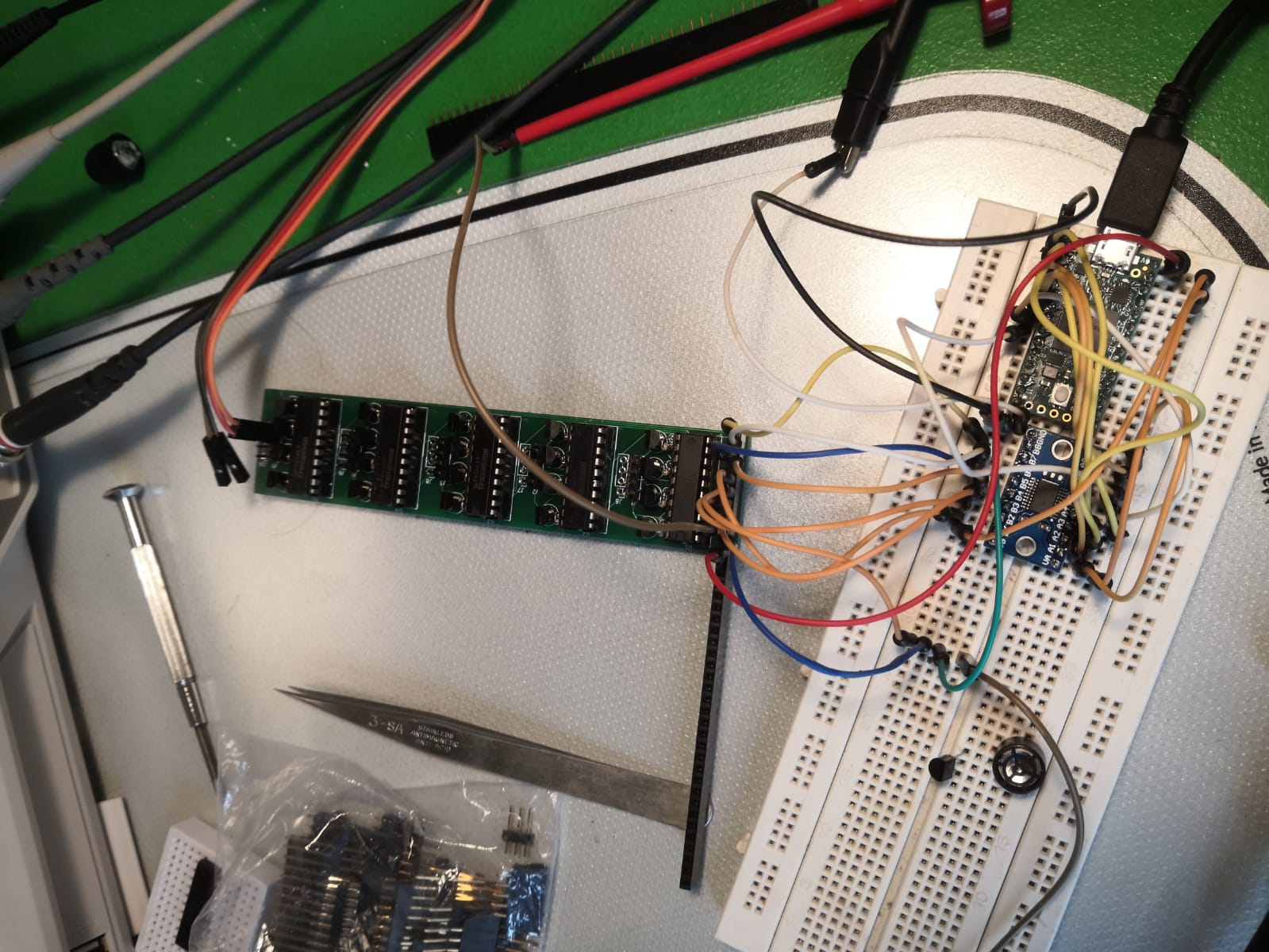 Then, I had to tightly pack my 100 emitters in a 10x10 grid and connect all of them to my half-bridges. I started with only 40. 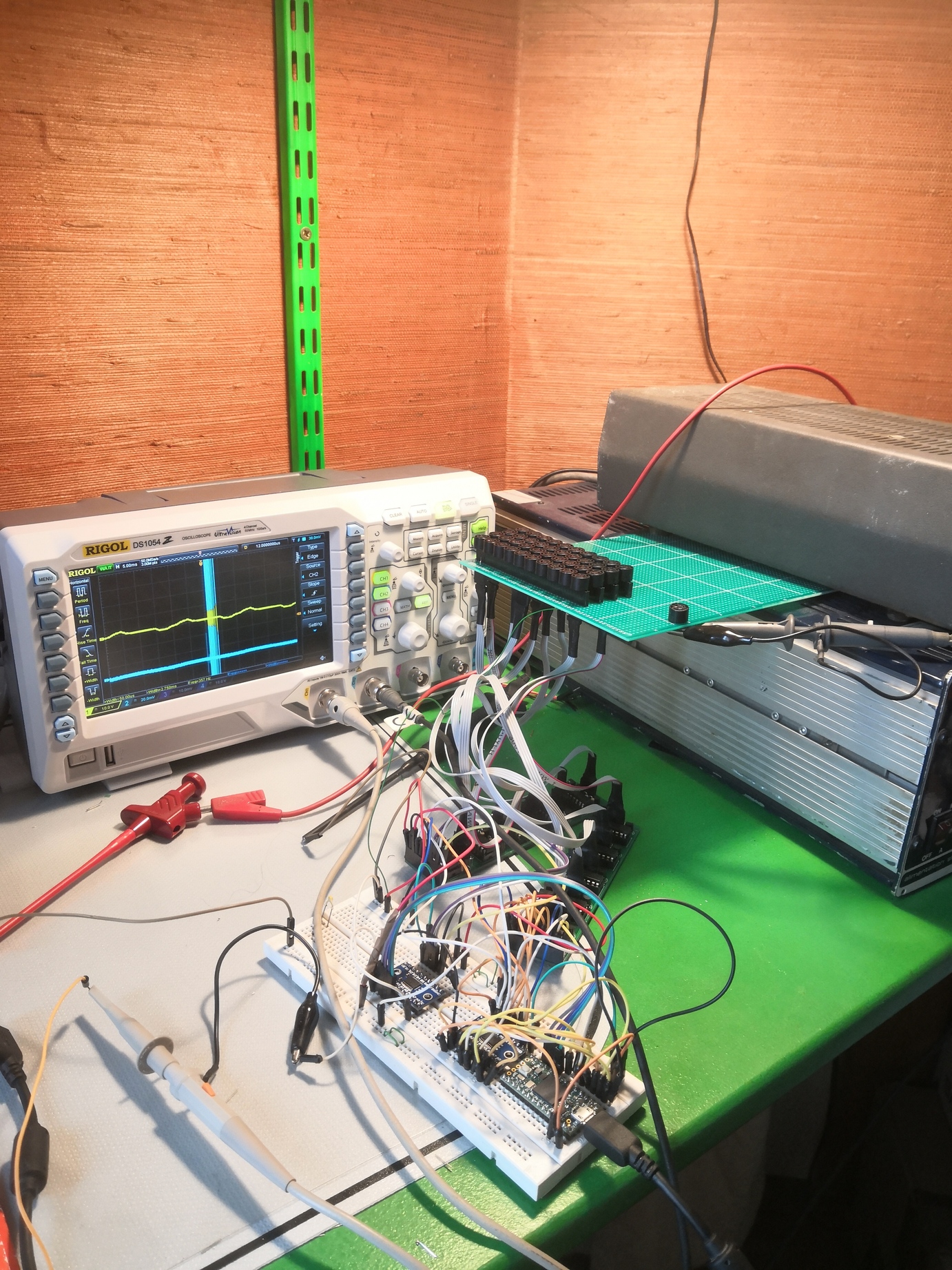 From bottom to top: Teensy 3.6 which generates the signals, TS1080 to convert the 3.3V signals to 5V, half-bridge PCBs, transducers. 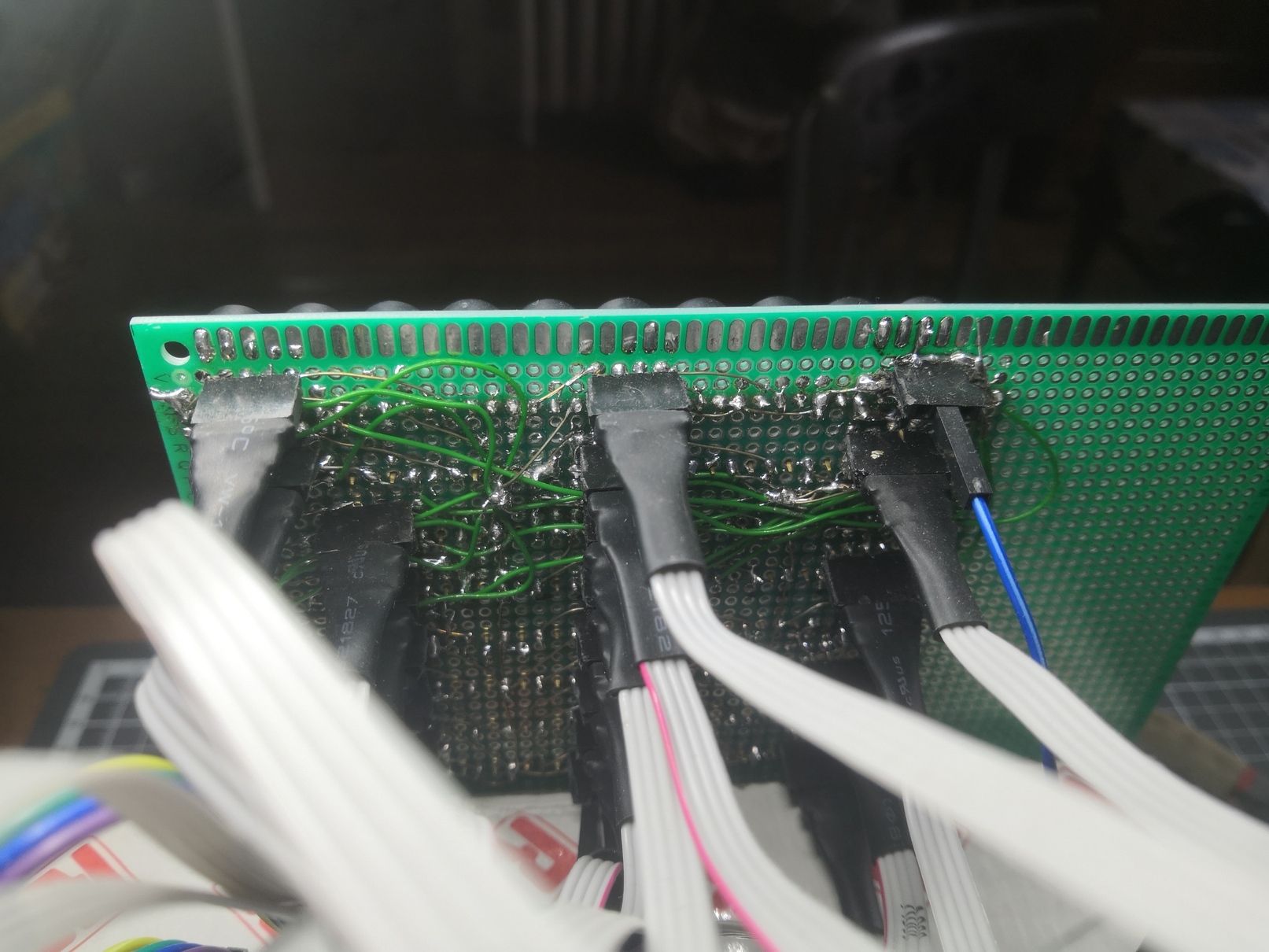 All wires are soldered a l'arrache to the transducers through headers so I can replace or change the polarity of individual transducers easily.

I started doing experiments with beamforming on the reception side for additional precision. I googled for "audio amplifier" and used the first schematic I found. I removed the caps because they're always useless and built this 9x directional receiver with LM386s. 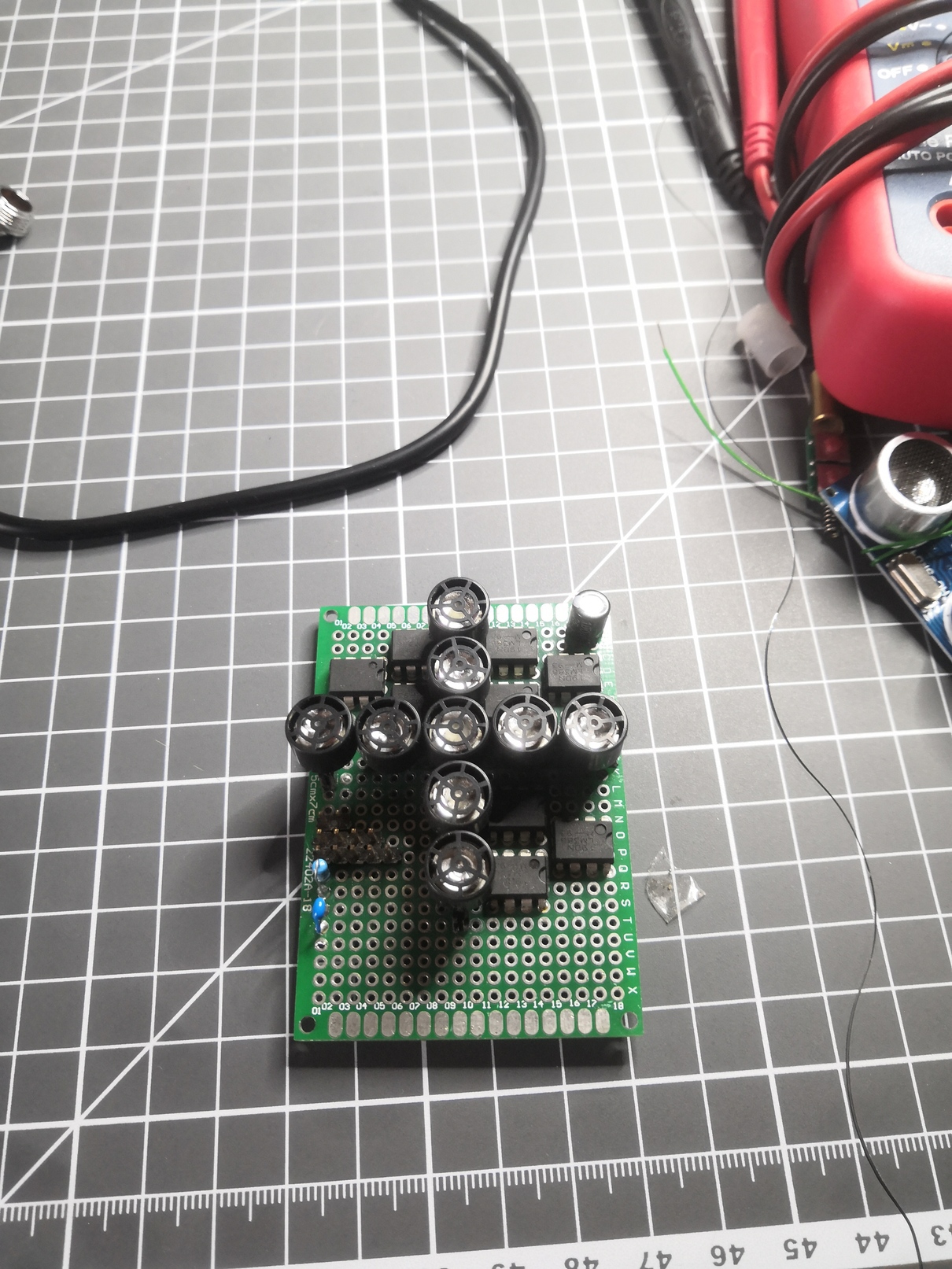 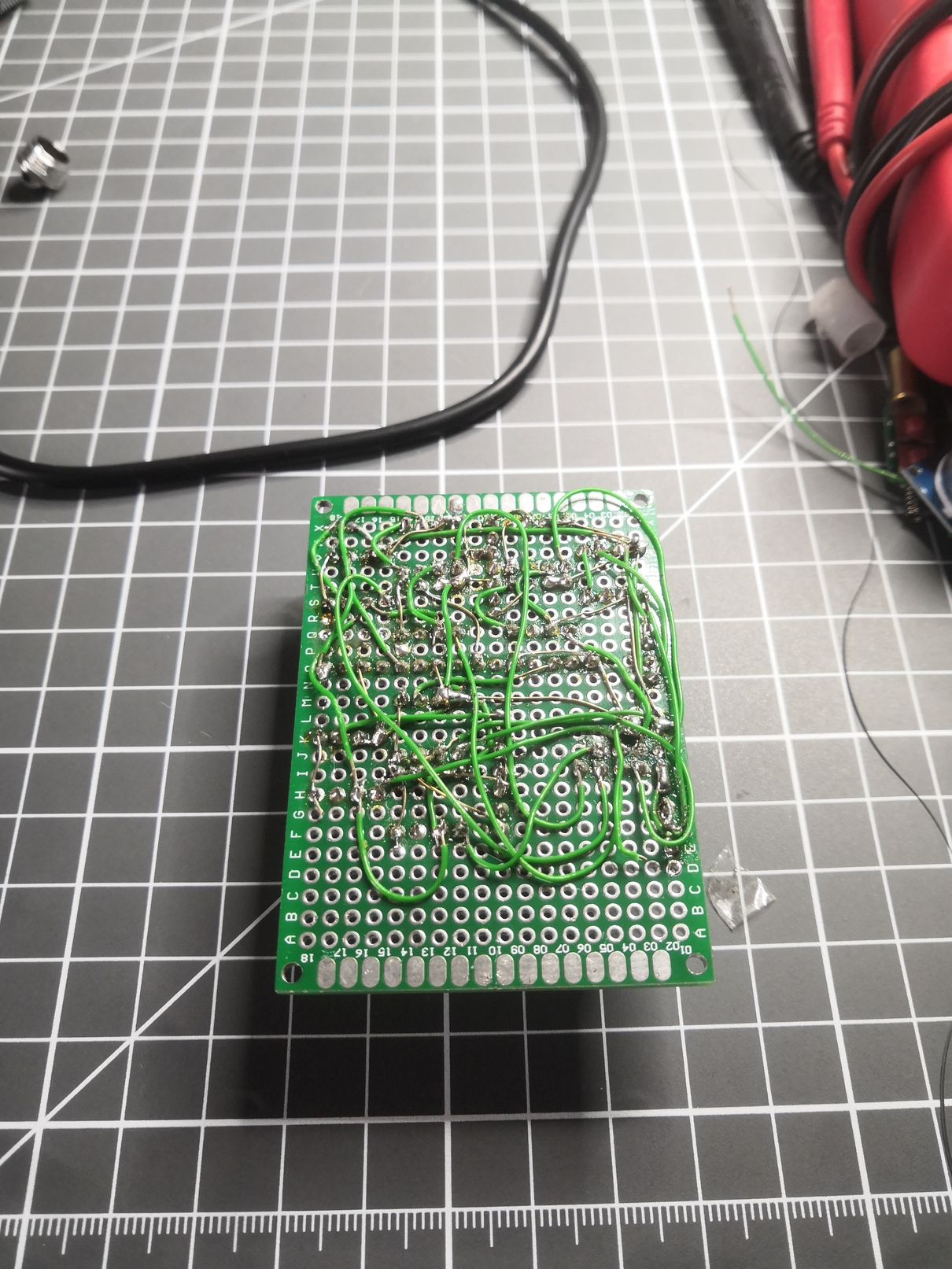 Of course, the signal it gave was too noisy to be used. I had a couple of spare HC-SR04. I wired one and used an oscilloscope probe to look for the analog signal after amplification. I found it and soldered it to the teensy. 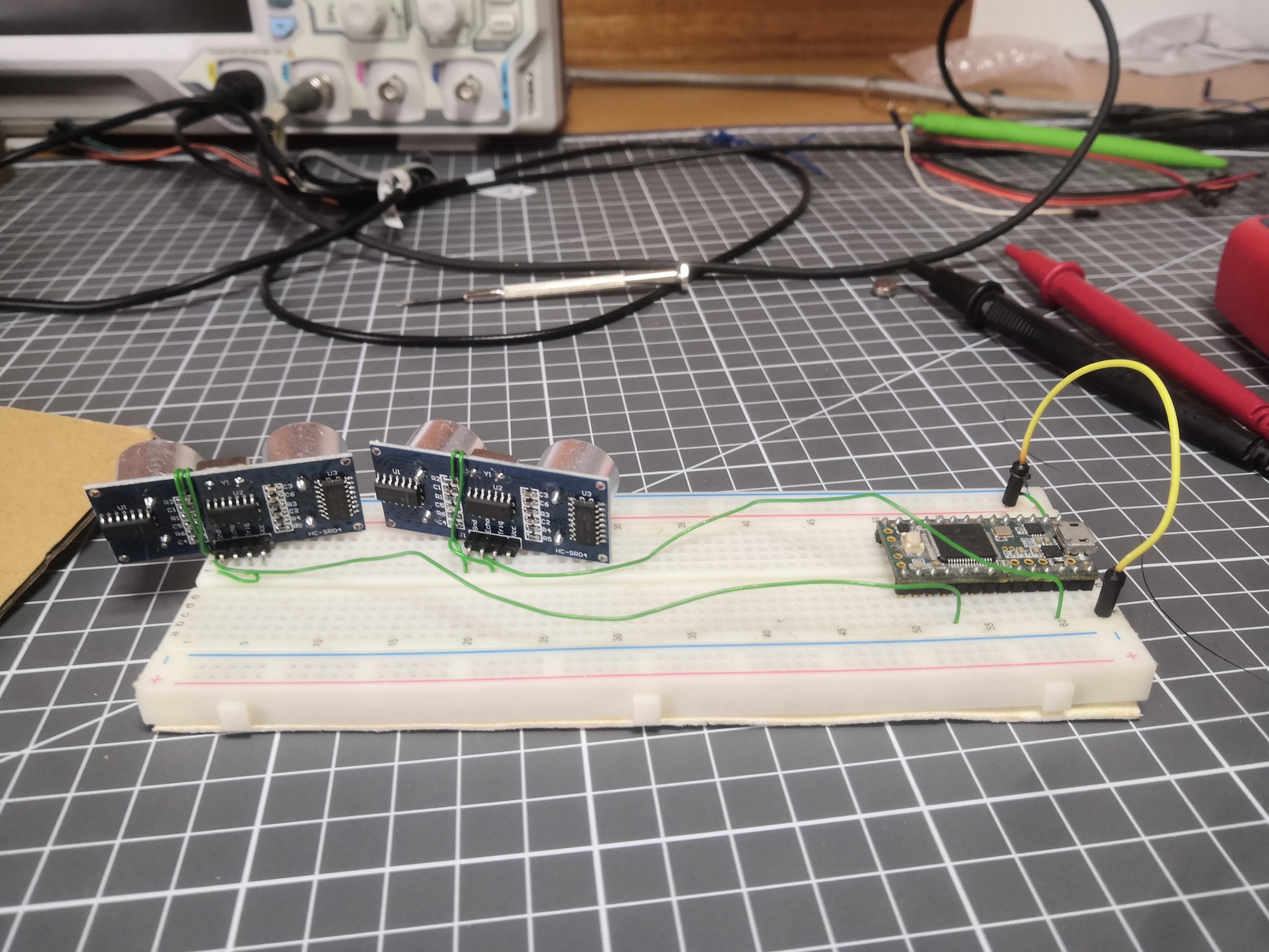 Ouch! That's going to be hard for a 600Mhz microcontroller! For that sort of requirement, engineers usually use FPGAs. An FPGA is a programmable logic chip that goes much faster for that kind of work. But, I had none on hand so I stayed with the Teensy 3.6.

The advantage of the Teensy is that the digital output values are stored in 32bits registers. I can change all of the pins in parallel using just a couple of instructions. By changing all pins in parrallel, my code "only" needs to run at 33.6Mhz. By pre-computing and storing the register values, I was able to go to that speed easily.

Tying it all together

Here's the global architecture of my scanner:

The PC tells through the serial port to the Emitter to emit in a specific place (ex: 40° vertical, -20° horizontal), and at the same time tells the receiver to start listening. Once the receiver hears the emitter's PING, it starts recording. After a few milliseconds, it dumps the data on the serial port.

Then, a python script does a few steps of signal processing:

Afterward, all points above a threshold are written as echos and are saved to a file. After launching gnuplot, I got my first 3D Images 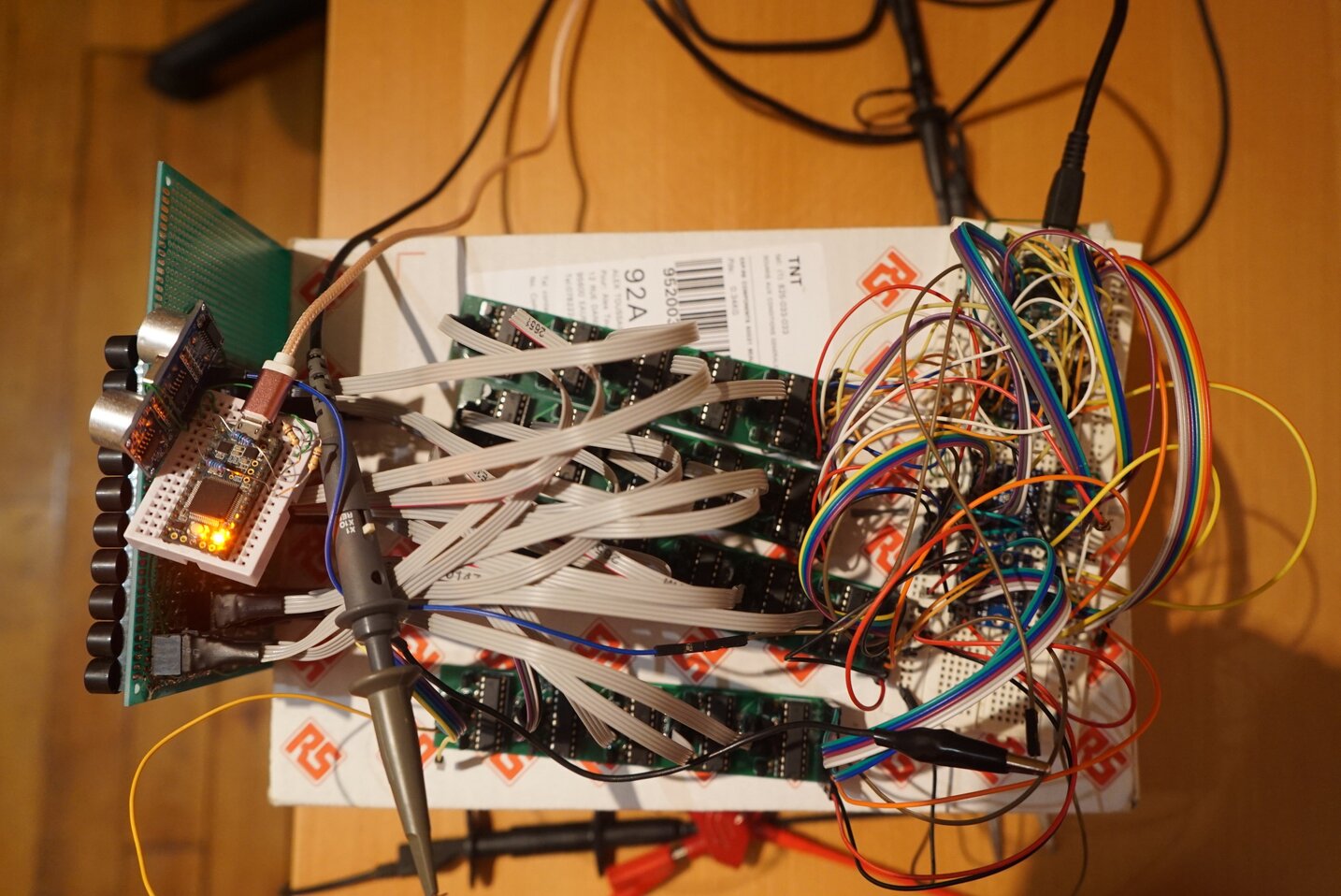 Here, the receiver is on top at the left 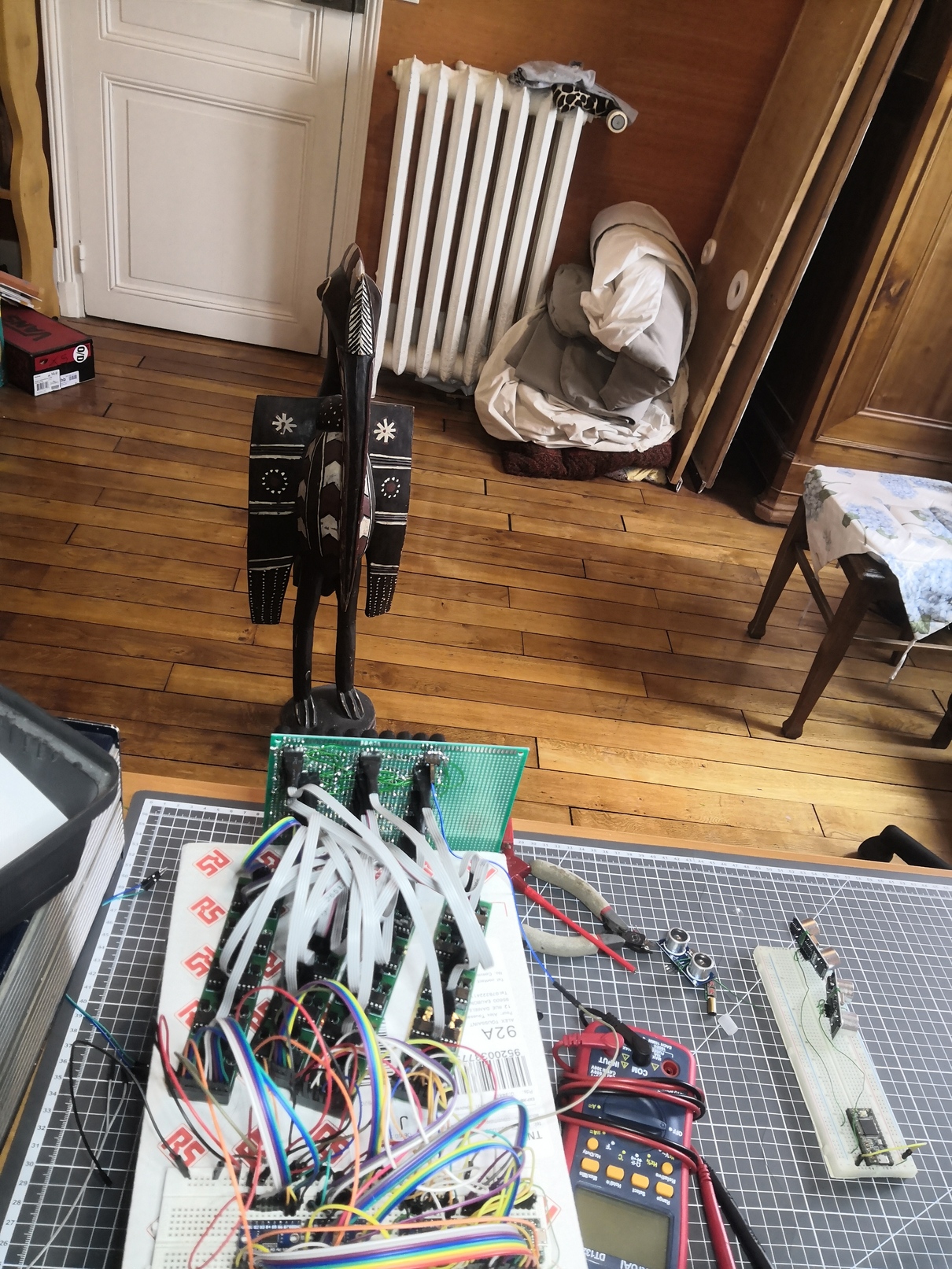 The room roughly as I scanned it for the first time 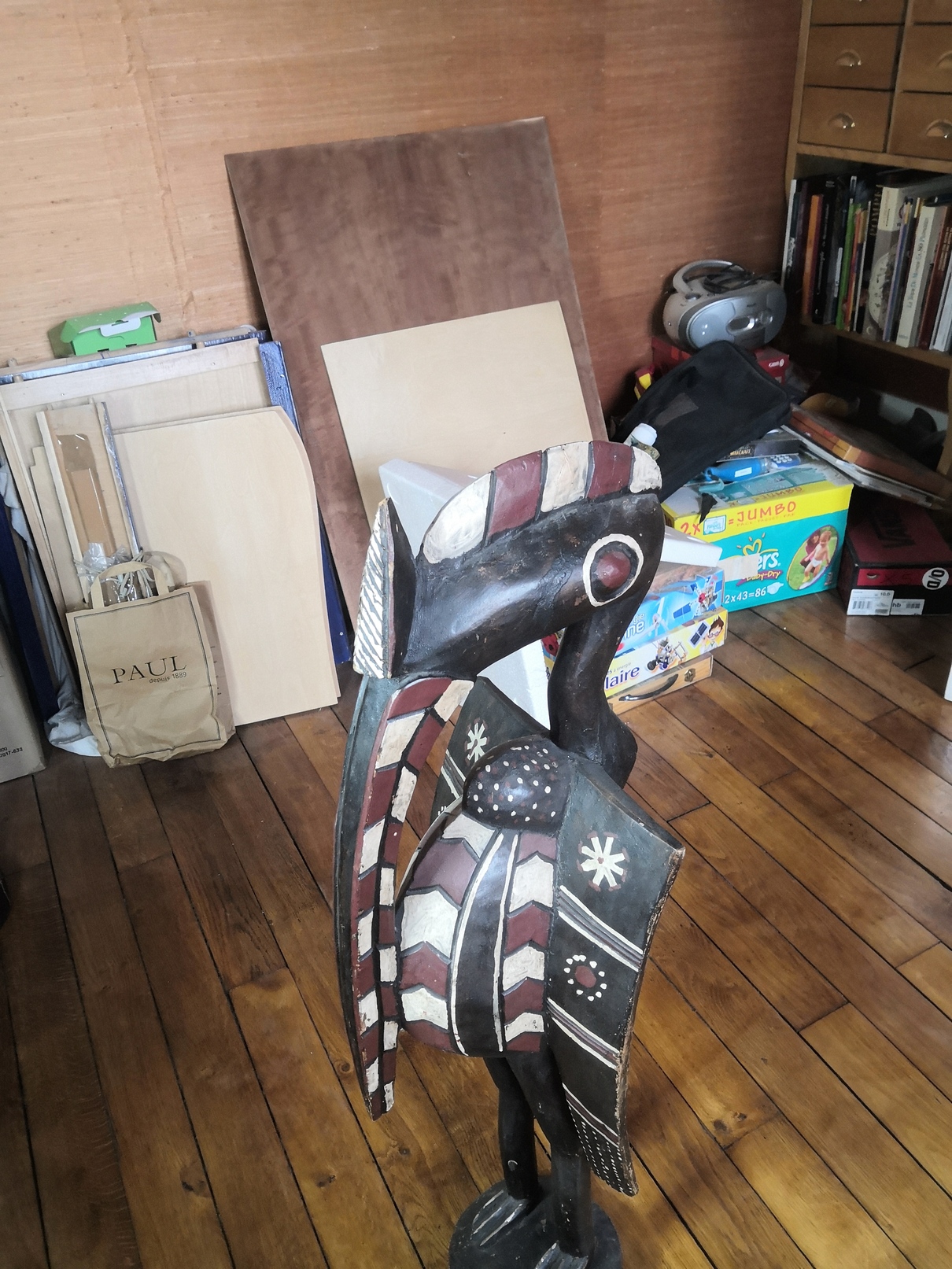 Close up on that bird, viewed from the right side 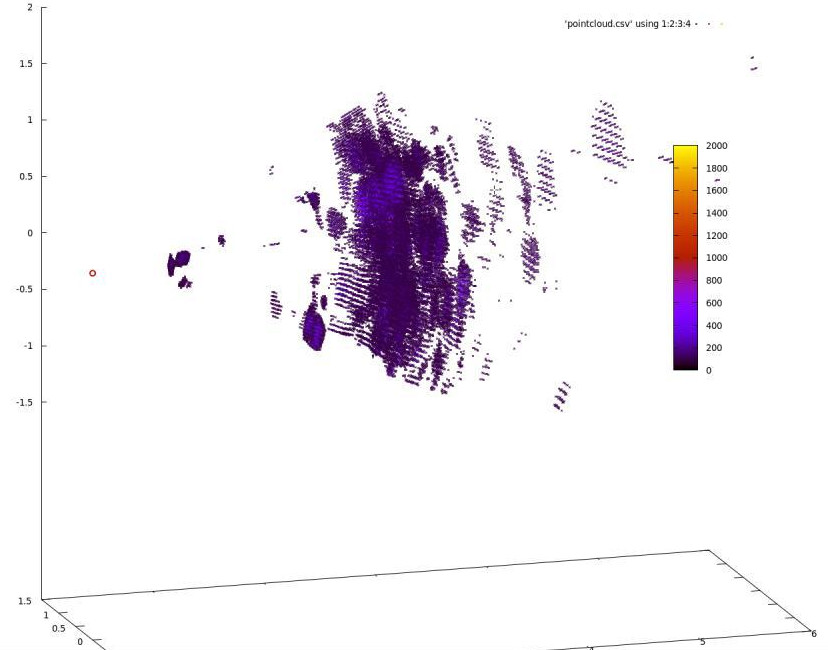 3D Scan of the whole room. We can see the bird on the front, the wall behind and elements of the wall. The emitter is the red circle on the left 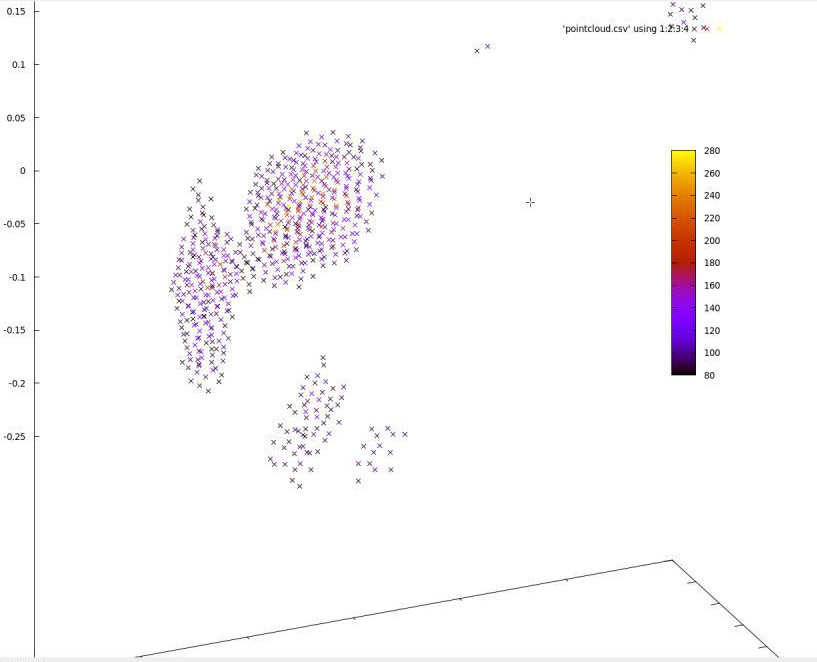 Zoom on the bird. The legs and most of the torso aren't visible because they're out of the sensor's field of view

I have solutions for each one of these problems but will keep them for myself 😉. I plan to develop this scanner into a useful commercial solution next year.

Why am I the first?

Getting there was not easy, but could have been doable for a long time. Here are still a few hypotheses:

If you've built something similar, reach out to me! I'll add you to the article to correct my lie.

Get an ultrasonic scanner for yourself

I've published all code and schematics on github. If you need any help building the device, email me or open a github issue and I'll write documentation.

My device can help with experiments around radars, beamforming and phased arrays. If you want me to send you one, email me!